The Park and Water Play

Last Monday, Mark and Austin both had doctor appointments scheduled. Early in the morning, Austin's doctor's office called and canceled his appointment. Since the kids had already been told they would get to go to town, we loaded up the whole crew for Mark's appointment. I thought I would take them to Chick-Fil-A and let them have lunch there and play until Mark was done. We dropped him off and headed to the restaurant. I got the kids unloaded and indoors without any problems. I ordered the food. The kids asked if they could go play and I told them they had to wait until after we ate. Just as the workers were putting our food on a tray, I got a text message from Mark saying, "I'm done."

Anticipating disappointed faces and possible tears and/or tantrums, I turned to the kids and told them Daddy was done and we needed to leave and go get him. The kids surprised me and only protested a teeny-tiny bit. I think they knew we couldn't leave Daddy at the doctor's office while they played. That would just be wrong. They may have also only protested a token protest because I promised them we could go to the park before they were able to formulate an argument.

We got our food and got back into the van to drive up the road for Mark. Just as I put on my blinker to turn into the parking lot, I got another text from him. It said, "Hold on. Having X-ray of my head."

Are you kidding me!?

Luckily, Mark was finished within a few minutes of us getting back to the office. The X-ray was to look at his sinus cavity, so nothing serious. I told him the deal I made with the kids and we headed to the park. I love this particular park. It is really well built, with a castle right smack in the middle. There is a toddler area on one side, but the best feature to me is the "fence" around it. There is only one way in or out. As long as I can see it, I know that my kids haven't wondered off or been abducted. It was a nice, clear day, if a little warm. We only got to stay for about 30 minutes, but the kids had a great time. 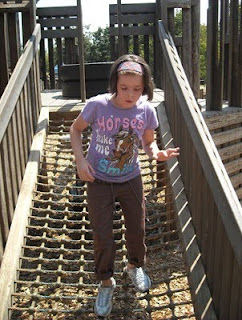 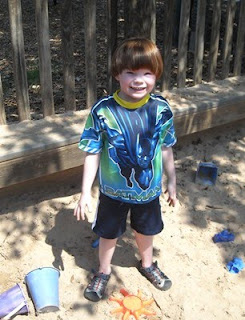 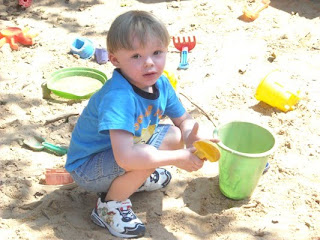 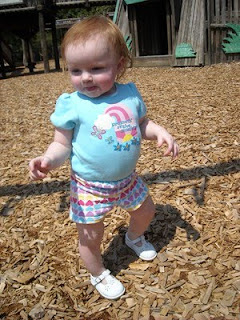 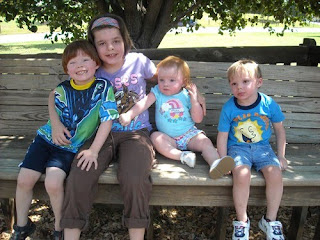 Yesterday, Mark did some outside work and took the three oldest with him. I stayed inside with a napping Anna. Two things happened that led to the third thing, that led to the fourth thing. One: The kids got filthy. Two: Mark washed his motorcycle. 1+2=3 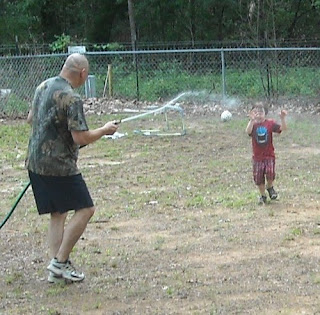 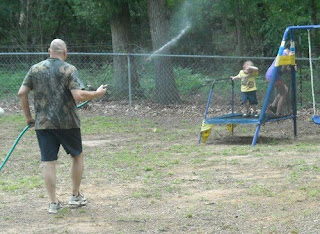 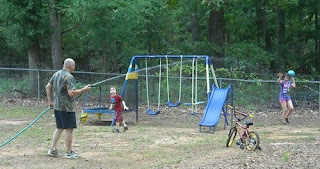 The kids had so much fun taunting Mark and then running away from the water hose. He got them all in the end. I would have loved to have taken my "big" camera out, but I wasn't about to risk it getting wet. The kids were completely soaked. This is what led to the fourth thing. Being the smart woman that I am, I went into the house and gathered up clean clothes, underwear, towels and soap. You've heard of "hosing a kid down" before you allow them in the house? Well, that's just what we did. Our deck is very private so no need to worry about the neighbors. The kids got squeaky clean and dry before they came inside.
Posted by Christi at 5:34 AM No comments:

It's the little things in life....

I adore getting new things for my kitchen. Recently, I have acquired two new additions. One is a set of awesome oven mitts. My old ones were wearing thin and in fact, one had a hole in it. I had to be careful not to burn myself when using them. Anyone that knows me knows I can be a little careless and accident-prone so this was a real concern. My new oven mitts are sturdy and also really pretty. As a side note, we plan to paint the kitchen walls red soon, so the mitts will match nicely. 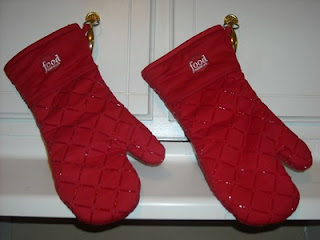 My second new addition is a new skillet. With a family of six, our old 10 inch skillet was just not cutting it anymore. I knew we would have to get a bigger one eventually, but when I made supper the other night, I realized the time was here. I had made a shrimp and mushroom linguine, but I doubled the recipe to feed our crew. Rather than risk it bubbling over, I had to pull out another skillet and divide the food into each to finish cooking. Of course, that meant another pan to wash and since I'm not big on doing dishes........ Anyway, here is a pic of our new monster skillet. It's actually an 11 inch chicken fryer, but it will do the job nicely! 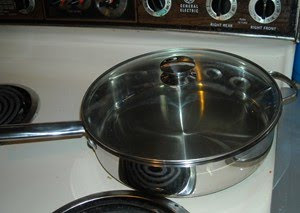 See how big it is compared to the 10 inch on the right? I don't care if it makes me weird, I love my new skillet! 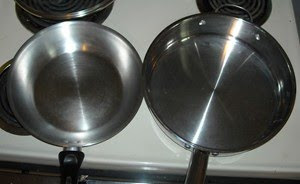 Posted by Christi at 3:18 PM No comments: