I think this year's Christmas was a success. Everyone was healthy this year (me being the exception with a cough), the kids were excited and Santa came! Our day began kinda late as all the kids slept until 11 o'clock this morning! They stayed up extra-late on Christmas Eve, so we weren't surprised. No naps today (except for me and Austin) so maybe they'll be back on schedule in a few. =) We opened gifts; the kids first, then Mark, then me. Austin wasn't terribly excited to keep opening gifts. He kept taking what he got and going around the corner to stack them up. He is such a funny little guy. We let Garrett open Austin's last two gifts because he wasn't interested anymore and Garrett wanted to keep going.

We watched Kung Fu Panda (twice) and started The Bee Movie. I think they watched it all; I fell asleep on the couch. I just woke up a little while ago to kids playing (arguing) with their new toys. At least they are still entertained by them. Possessiveness is at it's best (or worst!) on Christmas Day. By tomorrow they will have forgotten who all got what and will play happily with each other's toys. Except maybe Emily, she's pretty attached to her first Barbie stuff and thinks it's "only for girls". LOL! Here are some pics from this morning:

Austin unwrapping his first gift after not being too sure of the process.

Emily was only too happy to pose for a pic this morning. I think she likes Christmas! 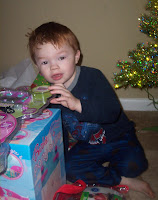 Garrett wouldn't get with his own gifts to take a pic. He preferred being with Emily's Barbie boat.

I was very excited to give Mark this Alabama sweat shirt. I knew for once he didn't guess what I had gotten him. Me thinks he likes it!
There will be no pics of me this Christmas. I look like hell. Only 9-10 more weeks until baby comes, then I will be happy to have someone else behind the lens. For now though, enjoy the other members of my family.
Love to ALL and a Merry Christmas!