The good news is that Anna is doing well and we are home. The bad news is Anna had to spend two nights in the hospital.

It all started Tuesday night when I noticed some pink urine in her diaper. The next morning it was a little more concerning so I scheduled an appointment with her pediatrician for 12 o'clock. We (Anna and I) went to the appointment, diapers in hand. The doctor looked at them and ordered a urine sample. Obviously Anna is too small to pee in a cup, so the nurse had to cath her. I was dreading this as Emily had it done when she was a baby and it was very traumatic. However, this time it was much better. We waited around for the results. When the doc came back in, he sat down and told me that Anna had tested positive for a kidney infection. Then he said that since she was so young, this was not something that was treated as an outpatient. You could have knocked me over with a feather!

An hour later we were checking into the children's hospital. I was worried, but I wasn't frantic. Anna seemed to be her usual self and no fever so I knew that being in the hospital was more of a precautionary thing. Little babies can take a turn for the worse rather quickly. The nurse assigned to us was a total gem. She was very nice to both me and Anna. She put in an I.V. lock on Anna's ankle and antibiotics were started every 8 hours. Mostly Anna and I sat around watching TV and eating. We were waiting for when a friend could come stay with Anna so I could run home and get a few things and have Mark bring me back to the hospital. I had the van with me and all he had was his motorcycle at home. I know it must have been hard on him to be at home while we were at the hospital.

Anyway, Mark and the other kids brought me back to the hospital and I spent the first night with Anna. The next morning our doctor came by to check on her. She still wasn't running a fever and was handling the medicine well. They still wanted to find the source of the infection so we went for a renal (kidney) ultrasound. Mostly it came back ok. Anna does have some dilation of the ureters, but that could be completely normal. They'll want to follow her until they close. So we'll be going for another ultrasound in 3-6 months. They also collected another urine sample (with a bag this time) for another culture. It was this test that in the end would determine if we could go home on Friday or not.

Friday morning we got the news that the second culture was good so we could leave by lunch. Because the first culture was positive for the infection, we did go home with a prescription for another antibiotic. We follow up with the pediatrician this Friday and he'll want to schedule one more test for Anna. He wants to do a VCUG. I forgot what it stands for, but basically they are going to check and see if she has kidney reflux. Thankfully this will be done as an outpatient. If she does have it, she'll have to go on preventive antibiotics. If she doesn't have it, I don't know at this point if they will do anything else.

This past week just seems so surreal. We have four kids and she is the first to be admitted to the hospital. She wasn't even acting sick, but I knew something was wrong (just not hospital wrong). I was so unprepared to spend two nights there. But everything is good right now. Anna is taking the medicine like a champ. I was disappointed that one of those days was Austin's birthday. He turned two on Thursday. Luckily, he is young enough not to know it was his birthday. We're having his cake and presents on Monday. I'll have to blog and post pictures after.

In the meantime, here are some pics of Anna in the hospital:

Here she is sleeping. You can see the antibiotic machine in the lower left corner: 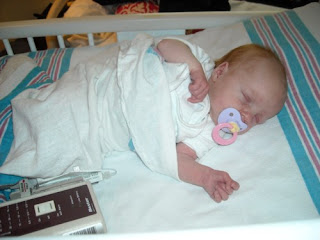 This is a close-up of her ankle I.V. lock: 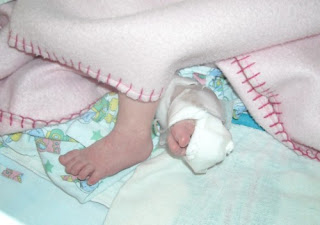 Here she is just lying in bed. It was nice to be able to pick her up whenever I wanted and to feed her whenever she wanted. The way the I.V. was set up, Anna was completely portable. 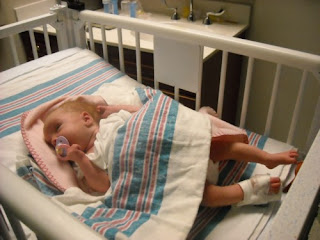