The Story of Emily, Chapter 10: Agenesis of the Corpus Callosum

Chapter 10: Agenesis of the Corpus Callosum
Standing in the hospital room, the day of Emily’s birth, we learned the new and confirmed diagnosis was Agenesis of the Corpus Callosum or ACC. This meant Emily was missing her corpus callosum, the part of the brain that connects the left and right hemispheres. Mark and I were told that this might impair her development or it might mean nothing at all. The doctor explained to us that many people did not know they had ACC. It was only discovered after their death when an autopsy was performed or if they had a head injury that required an MRI or CT scan. Also, some people with severe epilepsy elect to undergo a procedure called a corpus callosotomy in which the corpus callosum is cut. Hearing this was a relief, but we still felt apprehensive, like it couldn’t be that easy. After everything we had been through, we knew there had to be more to the story. Still, it was nice to have some hope instead of the doom and gloom we had been subjected.

On January 24, 2001, we took our daughter home. First, we had to stop by Wal-Mart and get a prescription filled. While we were there, I had my first experience with my internal “Mama Bear”. Emily had developed a cephalhematoma on her head. We think I pushed her out so hard that she bumped her head on my pelvic bone. Her blood had gathered under her scalp to where it looked like half a golf ball had been placed there. Some idiot woman had the nerve to ask me what was wrong with my baby. I’m not sure what I said in response, but I am certain it wasn’t nice. After we left the store, we headed over to my father-in-law’s house to show off the new baby. We had a nice visit, except I was in so much pain that I didn’t commit it to memory very well. No one had ever told me how much pain your body can be in after birthing your first child. It hurt to sit. It hurt to stand. It hurt to walk. Once I got into a semi-comfortable position, I didn’t want to move unless absolutely necessary. I was anxious to get home so I could do that. Home is also where we could finally get on the computer and the internet. We were eager to research ACC and find out as much as we could. 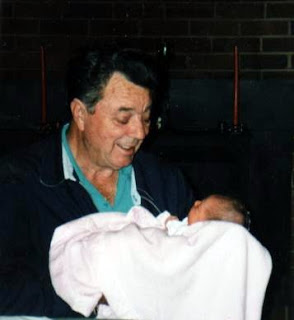 At last we were able to walk into our house and settle Emily into the bassinet we had set up in our room. Once we got her to sleep, Mark and I hopped on the computer to see what we could find. The internet was a different place nine years ago. When searching for information on a rare disorder, one was more likely to come upon obscure studies rather than something with a comprehensive overview. We read through tons of reports with ACC only being mentioned in passing. In the end, we were only able to find two sites that were both medically sound and easy to navigate, plus they were government ran. One site was the National Institute of Neurological Disorders and Stroke (NINDS) and the other was the National Organization for Rare Disorders (NORD). Gathering information from both of these sites (and some of the obscure studies), we began to understand what ACC could mean for our family.

Today, there is a wonderful group called the National Organization for Disorders of the Corpus Callosum (NODCC). They are dedicated to the education and support of those that have an Emily in their lives. I wish they would have been around in 2001. At that time there was a group called the ACC network that was the precursor to NODCC, but they weren’t as easily available. I would like to share the behavior characteristics the NODCC has listed on their site:

Behavioral Characteristics Related to DCC
This is an overview of the behavioral characteristics which are often evident in individuals with DCC.
These symptoms occur in various combinations and severity. In many cases, they are attributed incorrectly to one or more of the following: personality traits, poor parenting, ADHD, Asperger’s Syndrome, Nonverbal Learning Disability, specific learning disabilities, or psychiatric disorders. It is critical to note that these alternative conditions are diagnosed through behavioral observation. In contrast, DCC is a definite structural abnormality of the brain diagnosed by an MRI. These alternative behavioral diagnoses may, in some cases, represent a reasonable description of the behavior of a person with DCC. However, they misrepresent the cause of the behavior.


Everything listed above are all things we also came across during our research. We knew we would (most likely) not know to what extent ACC affected Emily until she was older. As a newborn Emily was on target developmentally. Once again, we would have to ‘wait and see’ what her prognosis would be. Would she roll over on schedule? Sit up? Crawl? Walk? Talk? Would she accomplish any milestones at all? Emily was due to start school and therapies sometime in the Spring when I went back to work. Until then we still had a few hurdles to cross and a couple of important visits.

The Story of Emily, Chapter 11: Doctors and Visitors
Posted by Christi at 5:40 AM