The Story of Emily, Chapter 11: Doctors and Visitors

The Story of Emily
Chapter 11: Doctors and Visitors
Friday, four days after Emily’s birth, we had our first appointment with our new pediatrician. Working at The Special Children’s School (TSCS) had been an advantage when searching for a doctor for Emily. It was easy to get a recommendation for a great pediatrician familiar with disabilities. I liked Dr. C immediately. She was warm and friendly, but also no-nonsense. I knew she was the perfect fit for us, especially since Mark liked her too. She listened to our story and understood our worry. One issue we had was Emily’s tongue. She was born truly tongue-tied. Her frenum/frenulum (the little piece of skin that anchors a tongue to the bottom of the mouth) went all the way to the very tip of her tongue. Dr. C took one look at it and decided it needed to be cut. She left the room for a minute and came back with a pair of surgical scissors. Mark held Emily while Dr. C reached in and clipped her frenulum. It was over as soon as it had began. Mark handed Emily to me so I could nurse her and in less than a minute, she was fine! As a result of the tongue-tie, Emily has a bifid tongue, but I prefer to call it heart shaped. Our appointment lasted for quite awhile, but we never felt rushed. Emily had lost a little weight, but Dr. C assured me it was normal. Dr. C was very proactive and we left her office with appointments in February with a pediatric ophthalmologist and a geneticist.

On Emily’s due date, January 29, 2001, Mark went back to work. I was a little nervous to be left on my own, but I had plenty to occupy my mind. My parents would be arriving in one week to meet their first grandchild! Other than a short visit from my mom in November, I hadn’t seen my parents since June. I also had not been able to travel out there to see them. I guess I could have flown out, but I had wanted to stay close to my own doctors that knew what was going on with Emily. As the days passed, I got more and more excited to see my mom and dad.

Finally the day came when they drove up to our house after flying in from Texas. It was so good to see them! They were wearing shirts with Emily’s picture on the front. I think maybe, just maybe, they were proud to be grandparents. After the oohing and aahing over Emily, we got down to some serious picture taking. Afterward, they had surprises for me. Dad and Mark went and put Emily’s crib together while my mom pulled me into another room to show me this HUGE suitcase she had brought. Inside of it were gifts from all my friends and family back home. I felt like I was having another baby shower! I really do have the best family and friends. I think my parents were glad to be there for us and to enjoy the time in our house without worrying about Emily having surgery. They could have been here sooner, but the original plan was for them to be here if Emily had to have a shunt put in. Thank goodness that wasn’t the case anymore! Also, thank goodness I was feeling better. I could stand and sit now without wincing. I loved having my parents for a visit, but all too soon it was time to say good-bye. I hoped I would be able to see them again soon. 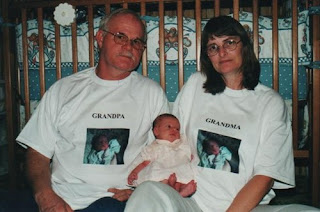 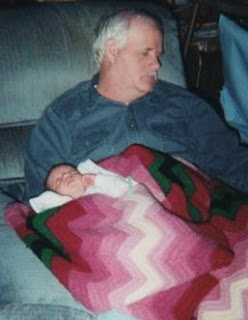 Grandma (she wasn't Meemo yet) asleep with Emily. 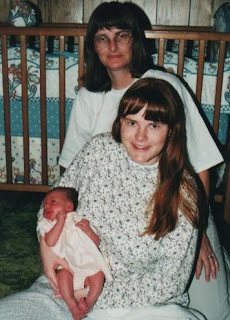 Not long after my parents arrived home did I get another surprise. My little sister, Jessica, found a way to come out for a four day weekend. This was the icing on the cake! I knew she had a full plate going to school, working and being married so it was super special that she was coming to see her niece. Emily and I picked Jess up at the airport and we had the best time driving back to my house, jamming to music. There is just nothing like a sister. Jessica was only in for a short stay, but she urged Mark and I to go out if we wanted. I think she really just wanted time alone with Emily. Either way, Mark and I did go out to dinner. We went to Mark’s favorite restaurant and for the first time in my life I ate a salad. I had always hated lettuce, but it seems having a baby changed my taste. While we were there, we saw on the TV that Dale Earnhardt had died in the Daytona 500. At the time I wasn’t a NASCAR fan, but I was still sad for all of his family, friends and fans. You can’t live in North Carolina and not be affected by something like that. However, I was a little cheered when we got home and discovered Emily had slept the whole time we were gone (1 hour and 58 minutes). Unfortunately, Jessica had to leave the next day. Again, I hoped I would be able to see her soon. 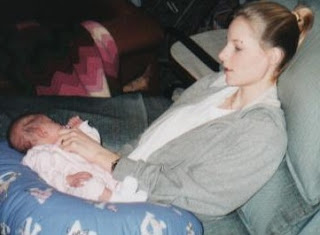 Just a few days after Jessica left, I took Emily to the children’s hospital to see the pediatric ophthalmologist. Mark wanted to go to, but it was at a time when it was difficult for him to take off from work. I was a little nervous about this appointment for two reasons. The first was Dr. W’s reputation preceded him. He is known as a brilliant doctor, but one with a bad bedside manner. Many parents from TSCS warned me about him ahead of time, so at least I was prepared for his abrasiveness. Parents still go to him though because he is that good of a doctor. The other reason I was nervous was the exam. Dr. W would be able to tell me if Emily had a genetic disorder called Aicardi syndrome. The prognosis for Aicardi syndrome is not optimistic. The average life span is only six to fourteen years.* The diagnostic criteria for Aicardi syndrome is agenesis of the corpus callosum, distinctive lesions on the retina or optic nerve, and infantile spasms. Aicardi syndrome affects only females except in rare cases where the male also has Klinefelter syndrome (XXY). Emily was not old enough yet for infantile spasms (they usually occur between 3 and 5 months), but she was a baby girl with ACC.

For such a big hospital, it ran like a well-oiled machine. I barely had time to sign us in before we were called back into an exam room. Dr. W came in to talk to me before he examined Emily. All of that was going pretty well until Emily started to fuss. I explained to Dr. W that she was hungry and that I was breast-feeding her. He kindly left the room so I could feed her. Today, after having some experience nursing babies, I would have done it in front of him. But, back then, I was still tense to feed in front of strangers (even doctors). After Emily was satisfied, Dr. W came back to do the examination. It didn’t take him very long to determine that Emily’s optic nerves were “nice and pink”. I decided then that Dr. W wasn’t that bad. Sure, he was a little abrupt, but how could I hold that against him when he just gave me some very good news?

It was only about a week later that Mark and I took Emily in for her ‘big’ appointment with the geneticist. These appointments were hard to get and it usually took months to get one. We were lucky there had been a cancellation when Dr. C had called to get us an appointment. Once again, we headed to the children’s hospital. Neither of us knew what to expect from the appointment. This was uncharted territory for us. We were soon called back to the exam area. Emily was first weighed and measured, then we were led to a room where the doctor’s assistant (P) was waiting for us. She began by asking us very familiar questions about my pregnancy and our family history. Having just answered these questions a few months before, the information was still fresh in our minds. P left with our answers and returned in just a little while with the geneticist.

Dr. S was very nice, but she had a thick accent so it was a little hard to understand her at first. I hate to admit it, but Mark and I had a few reservations about her in the beginning. I had only heard of the other geneticist, Dr. J, before our appointment. Everyone always had glowing reports about Dr. J. In the end, though, Mark and I grew to like and respect Dr. S very much. Dr. S started by asking if it was okay if she recorded everything and from her front pocket produced a tape recorder and P had a pen and pad ready to take notes. We, of course, said that it was fine and the exam started. Dr. S examined every inch of Emily and I am not exaggerating. She started with her head, measuring everything from her head circumference to the space between her eyes. She made notes of Emily’s small chin, folds in the corner of her eyes, and milia on her ear pinnae (small white bumps on the outer ear). All of that was just the beginning; the rest of the exam was just as thorough. Dr. S also asked for and received permission to photograph Emily. She mostly took pictures of her head, face, tongue, hands and feet.

When Dr. S was through with her assessment, she turned off the recorder so that we could talk freely. Sometime after her birth (I don’t remember exactly when) Emily had some blood drawn for genetic testing. This is one reason we were okay with waiting so long to have the amniocentesis done. We knew they would be able to test for the same things after birth as they would prenatally. Dr. S had the results of the genetic test. According to the findings, all of Emily’s chromosomes were normal and she had no extras. On the surface, this was all good news, but as Dr. S told us, the human genome is very complicated. Just because an abnormality was not found did not mean that one did not exist. It might only mean that the testing was not sophisticated enough to find the abnormality. Dr. S explained to us that Emily had enough minor ‘differences’ combined with her ACC to make her suspect a genetic disorder, she just didn’t know which one. It was frustrating with all the advances in medical science to not have an answer that day. However, Dr. S was confident that with enough time and research she would be able to find an answer for us. She wanted to see us back in six months.
* information taken from here

The Story of Emily, Chapter 12: The Learning Curve
Posted by Christi at 6:40 AM