The Story of Emily, Chapter 12: The Learning Curve 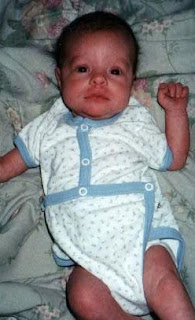 Chapter 12: The Learning Curve
March 2001 began with some exciting news. Mark was able to find Emily and me a ticket to fly all the way to my small hometown airport for only $137! This was HUGE. Every time Mark and I had flown to see my family we flew to Dallas and drove the few hours to my parents house. Flying into the little airport was always too expensive. I don’t think I will ever forget the cost of that one ticket as long as I live. I hadn’t planned on taking Emily to Texas until the summer, but with a price like that, we couldn’t pass up the chance.

Emily and I boarded the plane to Texas the second week of March. This worked out well since it was also my mom’s spring break. I was a little nervous to be flying with an infant for the first time, but it was a breeze (for the most part). Emily was only 7 weeks old and she did great. I found that nursing her on the plane was no big deal. I had a window seat and I just used the side next to the window to feed her. I was also the only one in the row on that side, so when she needed a diaper change, I used the empty seat next to me. I had a handy plastic zip bag to put the dirty one in, a tip I picked up working with preschoolers. The only problem I had the entire trip happened on the short flight from Dallas to the little airport. We experienced a rough landing and the panel above my head popped out and swung by the connecting wires, just inches above my head. Even with that incident, it was so nice to be in Texas again. I hadn’t been home in 15 months!

The day after we arrived, my parents invited the whole family over to meet Emily. On one hand it was a great day, on the other hand it was an eye-opening day. It was wonderful to see so many of my family members in one place. Usually when I flew in, I had to go from house to house and town to town to visit everyone. This time, I didn’t have to go anywhere, they all came to me. I think at one time we had close to 30 people in the house. With all those people, though, came the inevitable noise. It wasn’t that it was loud in the house, it just was not quiet anymore. Emily didn’t take so well to the rising levels. She began to get stressed, which in turn, stressed me. Eventually, I just took Emily into my parents’ room for some quiet time. It didn’t take long for her to calm down. As I was sitting in the room with Emily, I realized that she could easily get over-stimulated.

Emily’s reaction to the noisy environment was added to a list of concerns Mark and I were compiling to share with her pediatrician. That may seem extreme to some, but we were on the outlook for anything that could be out of the ordinary. We knew from my work that the earlier problems are spotted, the better. We didn’t want to miss a potential issue by dismissing is as “normal” baby behavior. In the weeks since her birth, Mark and I had noticed a few things with Emily.

From the day we brought Emily home, we called her attitude “contrary”. She had very definite ideas about what suited her and not. Sometimes it seemed like nothing would make her happy. She didn’t like to be swaddled and she hated newborn gowns. So many moms had raved about those gowns that I had several. If I put one on Emily, she would literally cry until it was removed. And speaking of her crying abilities, she was a determined crier. I’ll state right now, I am not a believer in “crying it out”, especially for a little baby. When she cried, I tried as hard as I could to meet her needs. Emily, however, would not be comforted by my (or Mark’s) attempts to find out what she wanted. She was only satisfied when she got exactly what she wanted. No amount of cuddling or holding or patting would pacify her unless that was what she was seeking.

One thing we noticed was brought to our attention back when my parents were visiting us. Emily had been on one of her crying jags and I had handed her off to my mom. Mom got Emily to calm down by rocking her back and forth in her arms, much like this video from FRIENDS. The very next day, we went out and bought a baby swing. Some parents and babies don’t like them, but for us it was the best invention ever. That swing was the one thing that would almost always calm Emily down. Sometimes, though, the swing wouldn’t work. I’ll admit that occasionally, I had to put Emily in her bassinet and walk away for a few minutes. I hated to hear her cry, but sometimes I had to go and collect myself so I could do it all again. I only did this when I had exhausted all the options I had to make her content, but still it was hard.

Besides the other issues we were having with Emily, I began to think she had low muscle tone in her arms. I noticed that her legs had much more strength than her arms. This is where working at the school came in handy. Had I not had experience with kids with both low and high muscle tone, I might not had ever picked up on it. As much as I enjoyed my trip to Texas and introducing Emily to my family, I was restless to return home so Mark and I could present our list of concerns to her pediatrician at Emily’s 2 month check-up. As new parents, we were learning not just the ins and outs of having a baby, but also the ins and outs of having one with special needs.
Posted by Christi at 7:00 AM