Taking a break from "The Story of Emily" to catch up!

I started writing "The Story of Emily" in January in anticipation of Emily's 9th birthday. I planned have it completed in just a few days time. I had wanted to coincide the last chapter (her 9th year) with her birthday. However, writing her story has turned out to be more involved than I originally thought. For one, it became more detailed as I wanted to convey not only what happened externally, but what we felt and thought as well. For another, I realized people other than my friends and family were reading the blog. If Emily's story can help just one person, in any capacity, I want to take my time to get it right. As of now, the story is 31 pages long (16,365 words) and she is only 1 month old where I have paused.

I need to take a short break from telling her story in order to catch up other events that have happened in the past 3 months. I have neglected to blog about my other 3 kids and I think you all would like to see some pics and video of them. I hope to get the blog up to date by this time next week. Then I will resume with the story until Austin's birthday in April. I hope to have "The Story of Emily" completed by June. There is still so much to tell, including her final diagnosis, the school years and homeschooling. I am also going to ask some good friends to read it and edit it for me. I would love some feedback on "The Story of Emily", especially if more information is needed or if parts are awkward.

First on the "Catching Up" agenda is Christmas! 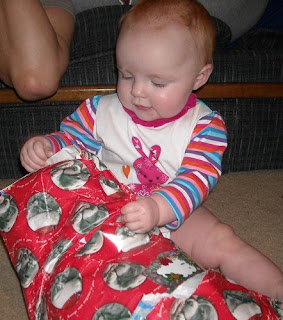 Anna's first Christmas. As expected, she loved the wrapping paper more than the toys. Look at the chubby thigh! After having three skinny babies, it is a new experience to have a "Buddha Baby". Shhh! Don't tell her we called her that! 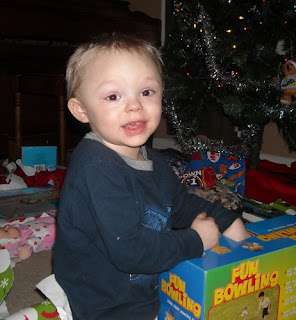 Austin did not want to get up on Christmas morning. In fact, he spent much of it crying. He seems to be happy enough here though! 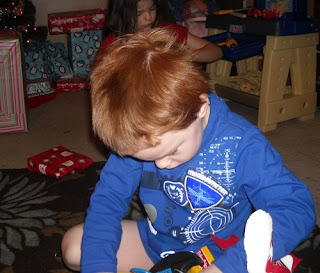 Garrett was too intrigued by his presents to look up long enough for a pic of his face. 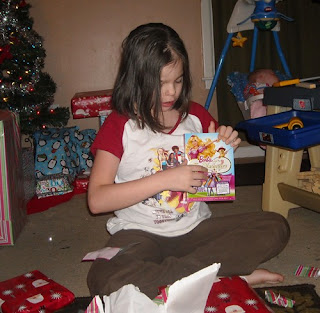 We had a nice quiet Christmas here at home. We had wanted to drive 3 hours North the next day to see my in-laws, but it was snowing quite hard. The same thing had happened the week before. This has been a crazy winter for everyone but us! We did finally get some snow, but those pics will come in a couple of days. Next up is Emily's birthday.
Posted by Christi at 1:51 AM